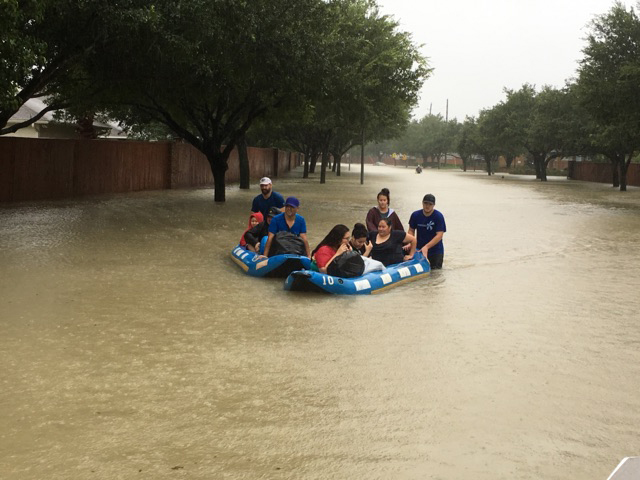 Rains are subsiding in Texas, and cleanup is about to begin. We hope to have our first local volunteers on the ground by Thursday. Rapid Response teams from other states are prepared to join our Texas team to help with this massive project in the coming weeks.

“We plan to start in Corpus Christi and work our way northeast,” reported Chris Troyer, Texas team coordinator. The entire eastern coast of Texas from Corpus Christi to Louisiana has been affected by disastrous flooding and wind damage. “It’s bigger than anything we can imagine.”

Although the rain is subsiding in Houston, the danger and devastation is far from over. Reservoirs are over capacity and can no longer be controlled, bringing new waves of flooding to areas that are usually protected by levees.

A news report this morning told of a shivering toddler clinging to the body of her drowned mother who had been trying to carry her child to safety. The death toll in Texas is up to at least 22 people.

Our Search & Rescue teams are on their fourth day of moving people to safe locations. Yesterday they worked in a large subdivision that was hit hard with flooding. The teams, now numbering more than 20 personnel, have rescued several hundred people from houses and vehicles. More than 30,000 people have been forced from their homes in Houston.

The CAM Loaves & Fishes Food Kitchen trailer has been set up on the outskirts of Houston. However, flooded roads kept our kitchen workers from getting into town until today. They are prepared to serve thousands of meals in the coming weeks.

We anticipate a major, long-term operation in Texas involving cleanup, chaplain work, literature distribution, and eventually rebuilding. “We may be in Texas for several years,” commented a team member.

Thank you for your outpouring of support and prayers.